Been a bit tardy with my updates of late…nothing since June, how remiss of me!

Loads seems to have happened (which if you follow me on Facebook, you’ll possibly have already seen)…anyway, quick round up:

I did a couple of songwriting workshops with the inmates at Hull Prison…a little bit scary to start off with, as I got the feeling that initially they’d rather be anywhere else but in a room with me trying to write songs.
I’d been asked to do the workshop by the organisers of Beverley Folk Festival; they were putting together a community project “The World War One War Horse Project” as part of the festival, to commemorate 100 year anniversary of WW1. This would bring together actors, musicians, local school pupils, a German School orchestra, and a War Horse (produced by the Millers Centre for vulnerable adults out of recycled milk containers), and the songs I was to write with the prisoners were to be a part of this.
I needn’t have worried, as, with a bit of help, the prisoners came up with some great songs (especially since most of them had never written a song in their lives before), and by the end of the session hi-fives and handshakes were exchanged.
4 days later I was up on the mainstage at Beverley Festival with my band The Men of a Certain Age (Martin Peirson & Peter Robinson) performing these brand new songs (trying to remember the lyrics and chords!): we seemed to pull it off, and along with all the other things going on, it all made for a moving performance.
A week later, in an article for The Daily Telegraph, Michael Morpurgo (writer of War Horse), who had been in the audience, was impressed enough to mention the prisoners’ songs in a poignant article he wrote about the 100th anniversary of WW1.  Here’s a pic of Mr Morpurgo with some of us who took part in the performance 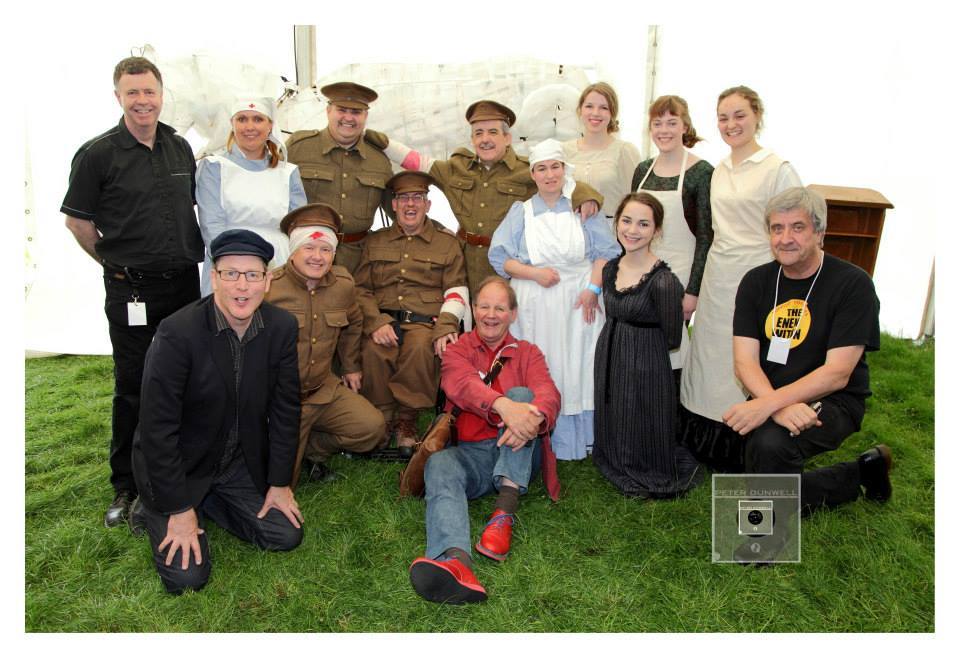 I seem to have been gigging constantly in the last 2 months, or at least at the weekends, including 8 housegigs. The housegig thing has gone crazy, got another 10 lined up this year (and 5 for 2105), not that I’m complaining, as they are amongst my favourite gigs…check out this video for True Believer (filmed at a genuine housegig in Blackpool) to see how they work (washing up not included!).

One of the most enjoyable gigs I’ve played this year was our performance at “Folk on the Farm” festival on Anglesey…guitarist Loved-up Les™ & I had a brilliant time, beautiful location (check out the view from backstage, below) lovely audience, the sun shone…and then to cap it all, after my performance the “committee” approached me and asked me if I’d be a Patron of the festival. I readily accepted (that makes two small festivals that I’m a patron of: Folk on the Farm, and BAMfest), and I’m looking forward to try and help both festivals become more popular each year (with Folk on the Farm, only in it’s 2nd year, attendance was up 400% this year).

I’ve got a whole schedule of autumn gigs that I’ll probably do a post for shortly..but in the meantime check out “gigs” here on this website, or go on my Facebook “artist” page for daily (-ish!) updates.
Bye for now
H x