Belated Happy New Year everyone…had meant to get this up in late December, but as you’ll see at the bottom, I had mitigating circumstances for the delay…anyway, what a brilliant year 2014 was (that is, until right up till Dec 12!)…thought I’d let 15 pics do most of the talking (most of them have been on Facebook, so apologies if you’ve seen them before):

Pic 1/  My album “The Last Mad Surge of Youth” finally came out, only 6 years after the debut (hey, I like to take my time and get it right!), to the best reviews I’ve had in 37 years of releasing records……but I will try not to leave it so long next time 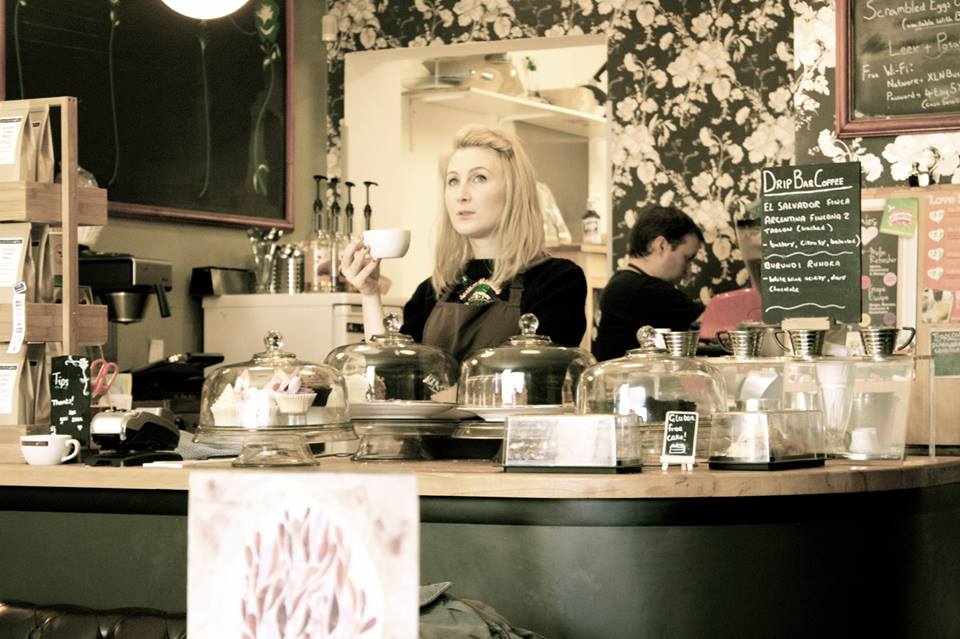 Pic 2/ Lotte Mullan, who co-wrote Valentine Song with me, playing a waitress in the beautiful video for the song; we filled a coffee shop with genuine lovers, can’t you tell?….check it out here:

We also made videos for 2 other songs off the album: Goodbye Common Sense and True Believer, both also on youtube. 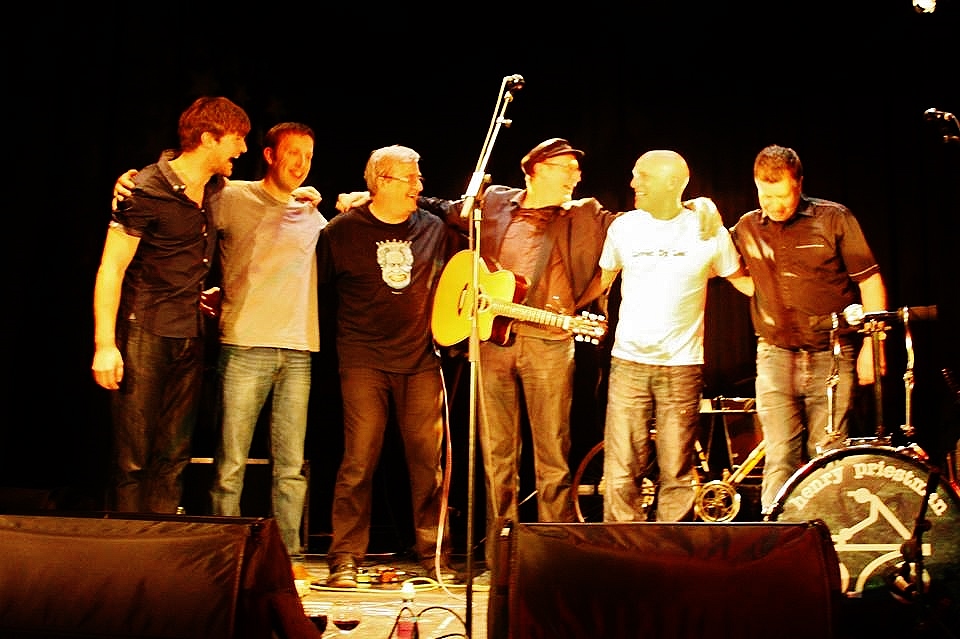 Pic 3/ Magical gig at Settle Victoria Hall in the spring…managed to get many of the musicians who’ve backed me over the last few years to turn up to this gig, which we filmed for DVD release in Feb 2015….trouble is, most of them had never met before…what could possibly go wrong? 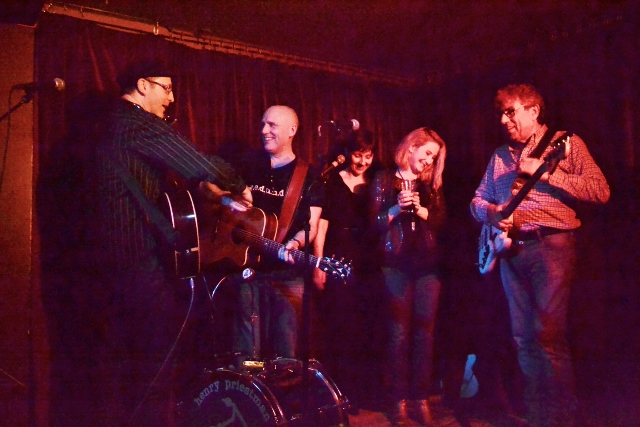 Pic 4/ Managed to conquer my fear of playing a London gig (hadn’t played a gig in the capital since 2005), and had a magical time in the process, at the Green Note in Camden (I’ll be back there in July 2015)…mind you, with a line-up of Loved up Les™, Micaela Haslam, Lotte Mullan and Graham Gouldman, what was there to be afraid of?! 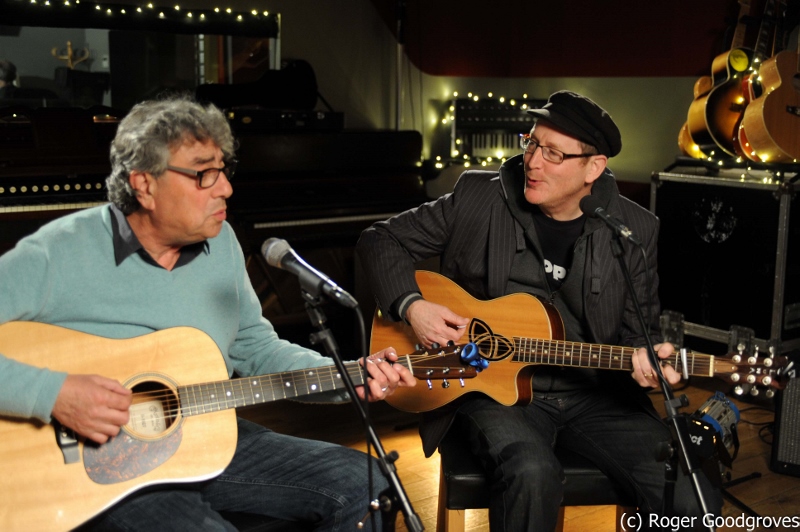 Graham Gouldman, HP perform “We Used To Be You” on Vintage TV

Pic 5:  Vintage TV (seems somehow apt!) chose to do a one hour special on me; well-respected journo Neil McCormick interviewed me, and I got to play a few live tunes, and the programme was aired on Sky TV in the summer…Graham Gouldman and I were doing some writing at the time, and I somehow managed to cajole him into joining me for the live tracks, which he literally learned on the morning of the show!…I’ve watched the 3 songs we did (which sound great), but, honest truth, I’ve not yet plucked up courage to watch the rest of the programme! (hate watching myself being interviewed!!)

HP, The Men of a Certain Age, and Longcroft School Gospel Choir

Pic 6/ I enjoyed playing a few festivals in the summer, including Beverley Folk Festival, BAMfest, Folk on the Farm, and Cornucopia (see pic) where, as well as the Men of a Certain Age, I was also joined onstage by the 26-strong Longcroft School Gospel Choir…magnificent! 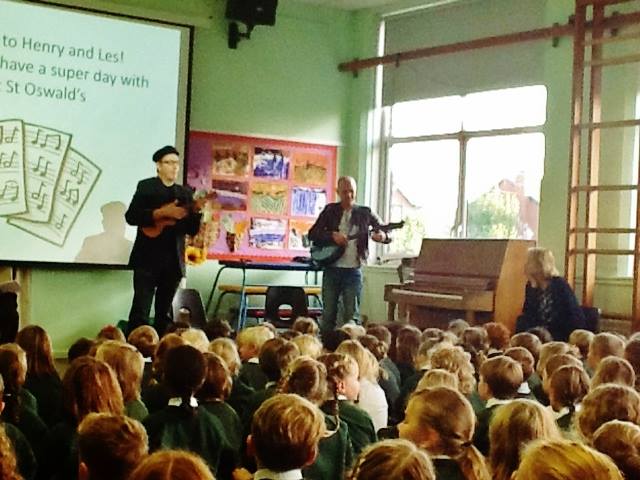 Pic 7/ …a school, for instance; it was a joy for Les and I to perform for the kids (and do a workshop) at St Oswald’s Primary school in Longton nr Preston…. 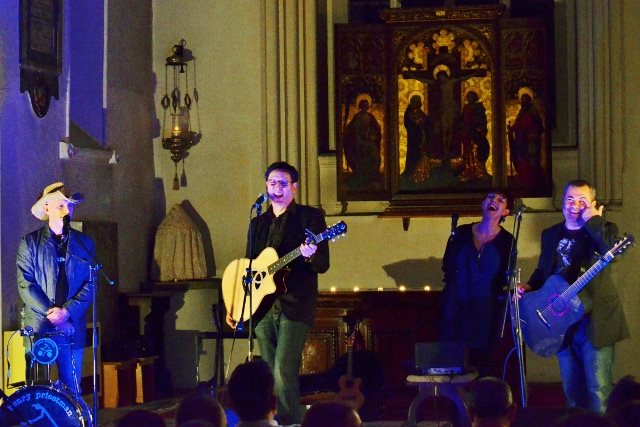 Pic 8/…..or a church; St Pancras Old Church has to be one of the most beautiful venues I’ve ever performed in, and the 3 part harmonies sounded amazing with the natural acoustics… 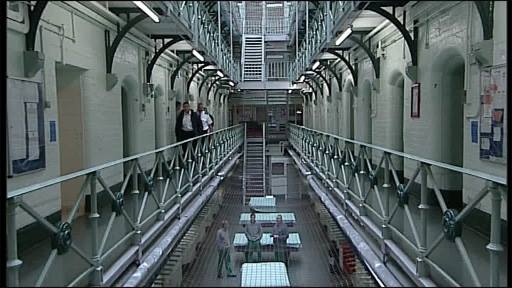 Pic 9/….or a prison; obviously no photos could be taken, but I enjoyed doing 2 workshops in Hull Prison in May/June…I gave a talk on songwriting, sang a few songs, then helped the prisoners write their own songs to commemorate 100 year anniversary of the First World War…daunting but very rewarding experience. 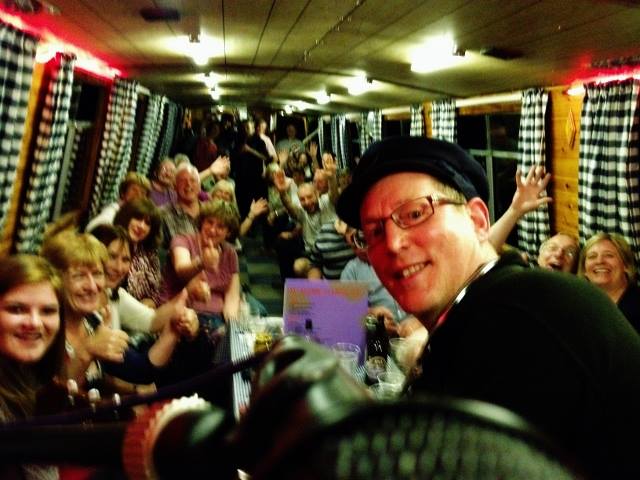 Aboard the “Kenavon Venture” on Kennet & Avon Canal (pic, Loved up Les™)

Pic 10/ ….or on a barge; we did this gig on a narrow-boat, going up and down the Kennet & Avon Canal, with a stop half-way along to pick up fish ‘n’ chips for the audience! 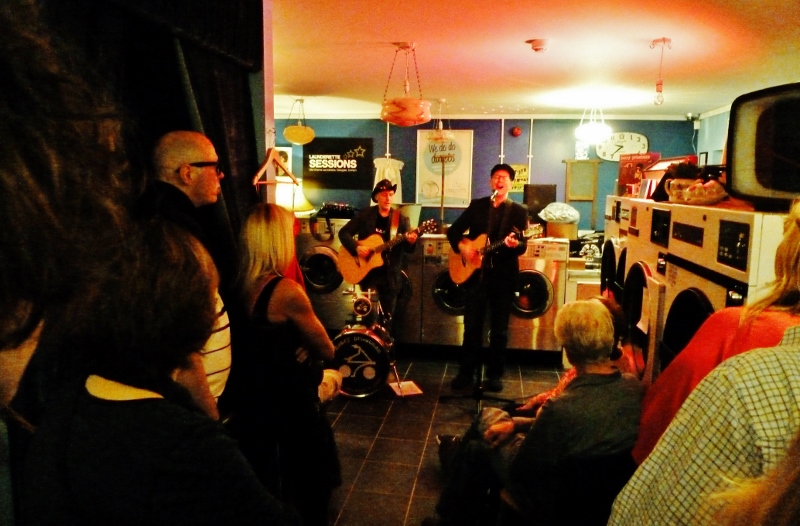 Pic 11/….or in a launderette; The Old Cinema Launderette in Durham is a working launderette by day, but in the evening it turns into the most intimate & unique venue imaginable (already re-booked for Oct 23rd 2015!) 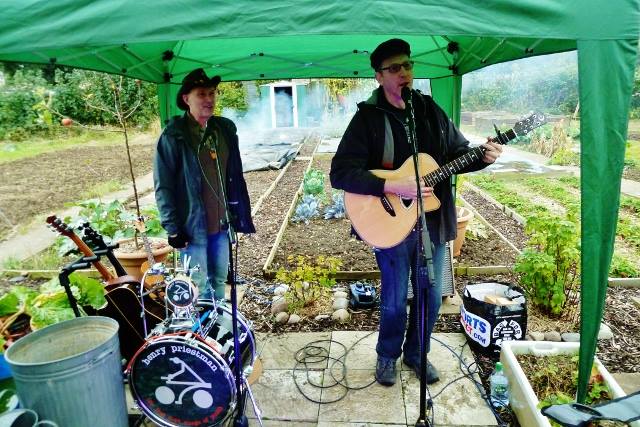 A “housegig” on Marian McNamee’s allotment in Coventry

Pic 12/ ….or (finally) on an allotment!!; this “housegig on an allotment” was in late October – Les found it a bit nippy on the fingers, but what a brilliant occasion! 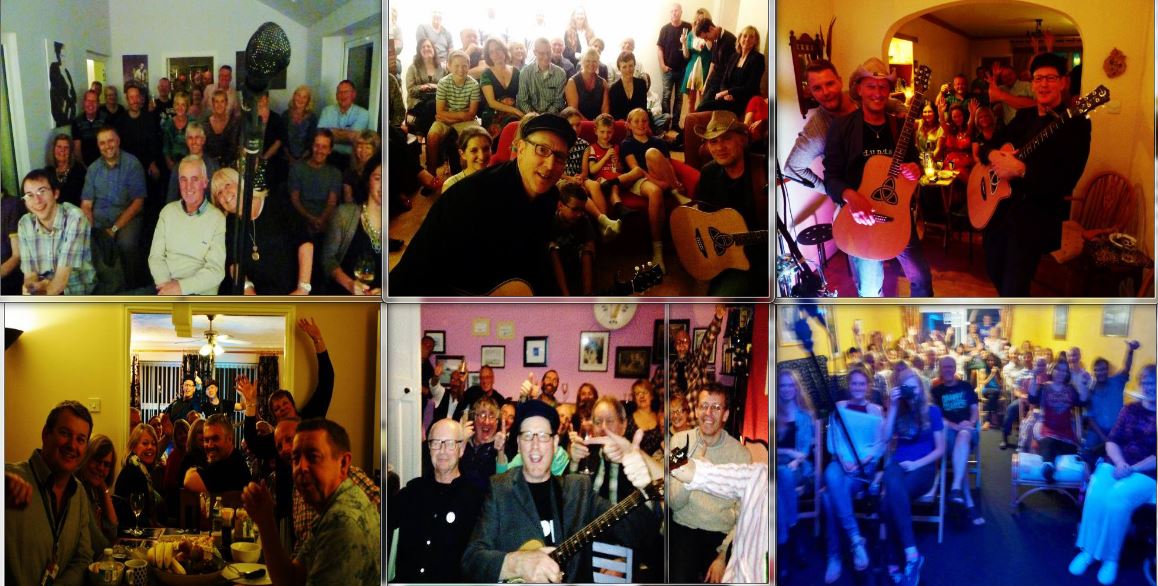 Just a few of the 23 housegigs I did in 2014. Top row: Preston, Farnham, Blackpool. bottom row: Rushden, Liverpool, N Newbald

Pic 13/ Talking of housegigs, they went mad for me in 2014 – still my favourite type of gig, and already got 15 booked in for 2015…if you’re interested in us coming to your house (or village hall, pub function room…or allotment) to do a concert, check the link out here, http://www.henrypriestman.com/house-gigs/  …….or message me on my Facebook page ( https://www.facebook.com/henrypriestman ) 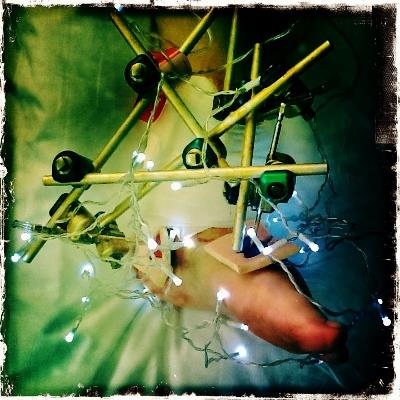 Pic 14/ Sometimes, life throws you a curveball: on December 12th my wife slipped, broke her ankle badly, spent 10 days in hospital, where she had 3 operations (including one where it looked like they had her ankle in a Meccano set, which we chose to put Christmas decs on, to cheer up the ward!)….so you could say that it was a strange sort of Christmas….it’s going to be a long haul (4 more weeks in plaster, then physio etc), but she’s being as brave as a lion, my cooking’s improving, and as my song True Believer goes “what doesn’t kill you makes you strong”. 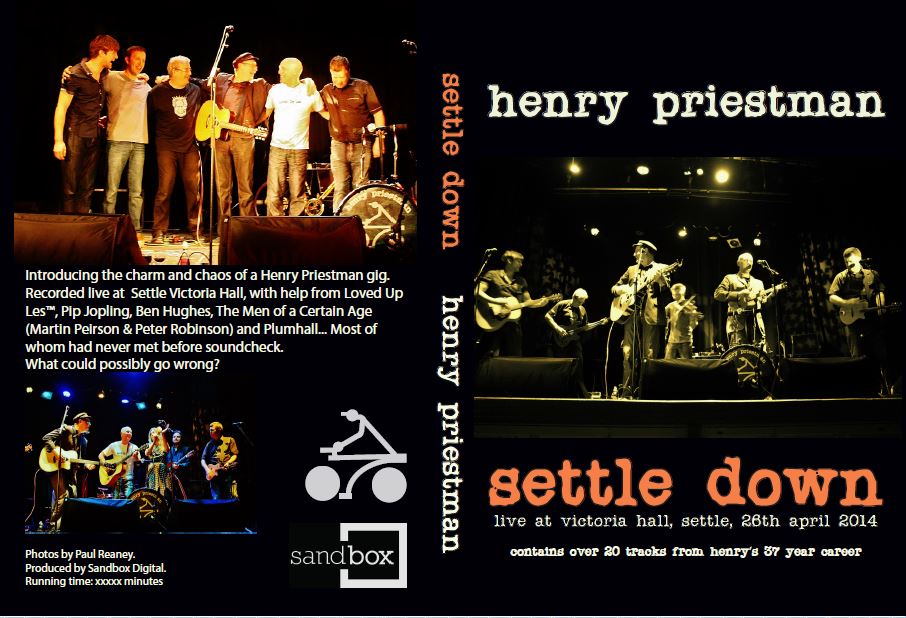 Sleeve of “Settle Down” Live DVD (design by Sandbox Digital)

Pic 15/ Looking to the future, I’m excited about the release of my first live DVD “Settle Down”, recorded at Settle Victoria Hall, out in Feb; it’ll be initially available from this website (and at gigs). We’ve got a couple of launch gigs organized on Feb 27th (at Settle Victoria Hall) and Feb 28th (at Cherry Burton Village Hall, near Beverley), as well as loads more gigs right through to December (all details on this website under “gigs”).

#FromTheArchive This weekend, 44 years ago, 19/02/77. Bizarre poster from the gig where we (Albert Dock) supported Shakey at Liverpool University.Shakey said "you lot should try playing in London".There's even audio of us on YouTube from that very concert, doing a pleasantly shambolic version my favourite Carole King & Gerry Goffin song, "Going Back".Great guitar solo by Martin Watson tho' but:https://www.youtube.com/watch?v=Yh-B1np7tJY ... See MoreSee Less

#ShedSession #13It was bloomin' freezing on Thursday when I filmed this version of "Valentine Song" in the shed...but, as 10cc once said, the things we do for love.For my beloved ❤️ ... See MoreSee Less

#FromTheArchive I posted recently about how I'd sent a box of old Yachts & Christians reel-to-reel tapes away to get "baked" and restored. The digitized versions have started arriving back, some wonderful stuff...the first Yachts demos, The Christians "Live at The Albert, Lark Lane 1985", the "Forgotten Town" demo (with me singing the chorus!!) etc etc. Have a listen to some 1978 Yachts demos that I've not heard since then (and forgive my rambling reminiscences)...we made a tiny film.https://www.youtube.com/watch?v=yHB8RfHASfAPS Sean Macreavy, who kindly did the baking and digitizing, is now a bit of a star; you might've seen him on BBC News last week, re the 10cc tapes he's restored...worth watching the film on youtube, it's called "The Great Stockport Bake-off". ... See MoreSee Less

Snippets of three tracks (accompanied by Henry's rambling reminiscences) from early demo tapes by Yachts, lain undiscovered/unheard since 1978. (This is just...
View on Facebook
· Share