Would you like Henry to come and perform a private gig at your home (or, if too small, then in a function room), garden party, wedding or whatever/wherever you like?
In 2010 Henry played his first house concert, and word must have got out (see recommendations below), as in 2016 he played 33 housegigs, and he’s got 21 booked in for 2017 already (booking info/email below).

He still finds these some of the most enjoyable gigs he does, so much so that he filmed the official youtube video for True Believer (click link) – off his latest album – at a genuine housegig (washing up not included!).

Though occasionally a function room is booked (for a charity bash, special occasion, eg wedding, or a 40th/50th/60th, umm even a 75th!), sometimes it’s just Henry stood with his guitar in the corner of someone’s living room, (or kitchen) no mic, no PA….have a whip-round, get a gig in your own front room – no driving, no parking, no hassle – surrounded by your friends…
Since meeting guitarist Les Glover in 2014, they now go out as a duo most of the time, and have developed a wonderfully wry onstage rapport, full of stories and humour…literally anything can happen at a HP housegig.

Henry offers a unique twist to the customary house-gig scenario: so far at almost every house-gig he’s done, he has managed to cajole someone from the party to come up and join him on a song or two (or more…!) on guitar, vocals, tambourine, whatever.

Mp3’s (and guitar tabs) of songs are exchanged prior to the event, and hopefully a quick run-through of the songs (just before the gig) can be facilitated. At one house-gig near Leicester, a whole band was laid on; Henry only met them an hour before the concert and they all quickly ran through a few songs…and as Henry adds, “I thrive on chaos”!

HOW TO BOOK: To enquire about fees, and about a booking for a house concert/function/wedding, either contact Henry through his Facebook site by leaving a message (or posting on his wall, & we’ll get back to you) or email here

“a fantastic evening in the company of this wonderful songwriter, musician & raconteur. Looking forward to having him play for us again”

“Turning 40 you have to do something special right? well you don’t get more special than this… I nearly fell off my chair when Henry agreed to play at my Party, I was even more surprised that he was happy to let me play guitar/sing with him, just the two of us, in my kitchen… and then to top it off he played one of my songs! Henry not only performed brilliantly he also has wonderful stories to tell. Everyone had a great night and are still talking about it today, Thanks Hen.”

“My mum was having a ‘significant’ birthday but we didn’t want to just throw her an ordinary party. So I got in touch with Henry and before we knew it we had our own concert in place, complete with support from my uncle’s Irish band. The night was absolutely fantastic – everyone had an amazing time (even the youngsters loved it – who says Henry’s just for ‘grumpy old men’??) and most importantly we gave my Mum the night she deserved. We even discovered a few closet Christians fans in the family! Henry played a great mix of songs and those that he did with my brother and the Irish band made the night truly unique. An unforgettable evening that will live long in the memory – thanks Henry!”

“Henry, is without doubt the best House Gigger out there, he was my third and I was his first! Thoroughly entertaining, engaging, witty and he can play a fine tune! He is willing to try anything, the audience were beside themselves when one of the guests surprisingly just got up and sang two songs with him (they had only met 1 hour prior to the gig). An evening to remember for ever!”

“Although he was a bit daunted playing such a small ‘House’ gig, he did it as a favour to me for my girlfriend’s surprise birthday party.. I joined him on keyboards for a few numbers & the whole thing was superb!”

“When I’d completed the building of my new home I decided to hold a big house-warming garden party to celebrate the realisation of a lifetime’s ambition and to mark the achievement of many craftsmen in making my dreams a reality. The audience was, therefore, quite mixed. We had bricklayers, grannies, architects, plumbers, friends, villagers, sundry relatives, the occasional stranger…. I was absolutely delighted when Henry agreed to play, thrilling over 100 guests with his superb performance and brilliant banter. The weather was awful but the party – indoors in the main – was excellent, with the whole house rocking. Top tip – when you invite your guests, encourage those who play to bring an instrument. They’ll end up with Henry on-stage as part of the latest incarnation of The Henriettas! Henry was so good he was almost as popular as the hog roast!”

”Earlier on in the year I had thought about arranging a party for my 50th birthday. At the same time, I had noticed on Henry’s website that he was available for “house gigs” and mentioned this to my wife.
A few weeks later we went to Leamington Spa to see Henry “live” for the first time. We enjoyed Henry’s relaxed, informal and very entertaining manner so much, as well as all the great music, that we booked him there and then to sing at the party in June. When the invites went out, with Henry’s permission we sent out a “taster CD” to all the guests who ranged in age from 8-80 (literally). This meant that by the time of the party, most of the guests were familiar with some of Henry’s music.
The event itself took place in a room at the rear of our local pub and was a huge success. Henry not only put on a great show, but he also took the time to mix with many of the guests during the evening. An hour prior to the show he had a very quick rehearsal with a friend’s daughter Becca (who would sing with him on three numbers in the gig), and he effortlessy put a nervous singer at her ease. The evening finished with some of us joining Henry on stage for a rousing reprise of “Old”.
Henry also stayed at our house overnight in the newly decorated “Henry Priestman Suite” which unfortunately is not quite as grand as it sounds. He even “audited” my entire music collection the following morning and insisted that I consign my Victoria Beckham solo album to the Recycle Bin before leaving. This is a free service that he offers !! With all the new found fans and friends that Henry made on the night he has already been booked to return to Hinckley for a second gig in February 2014.” 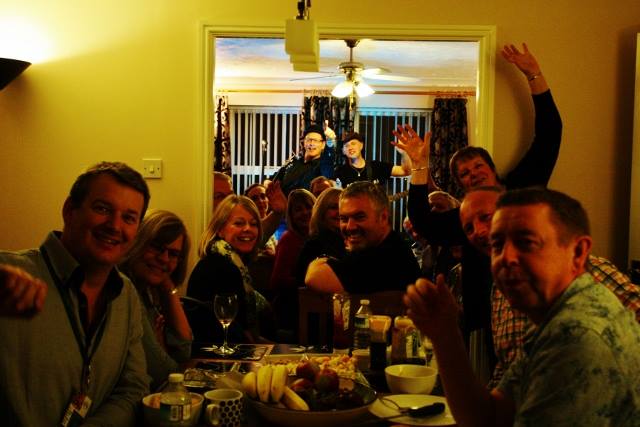 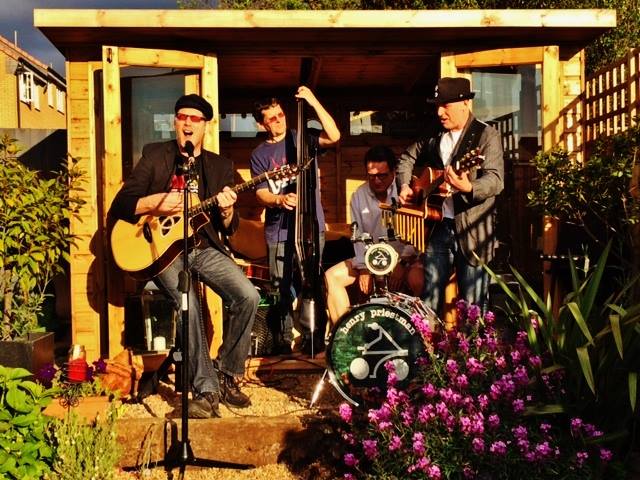 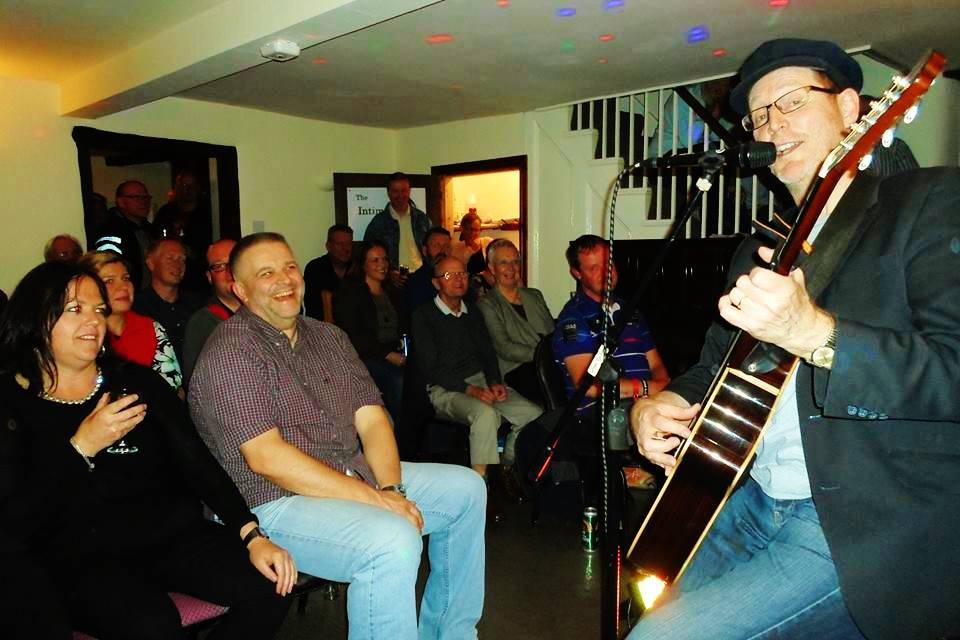 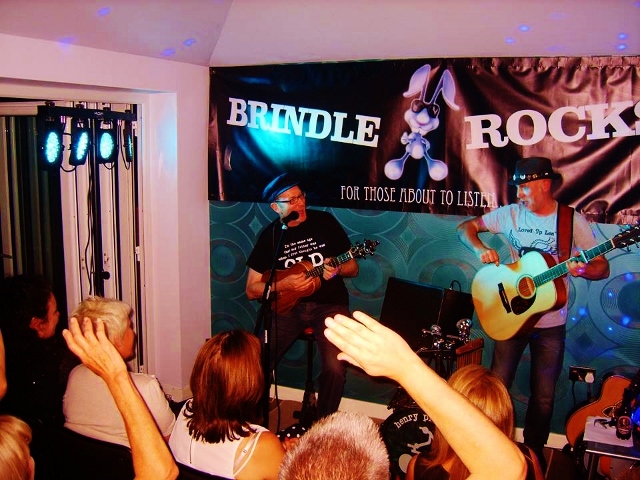 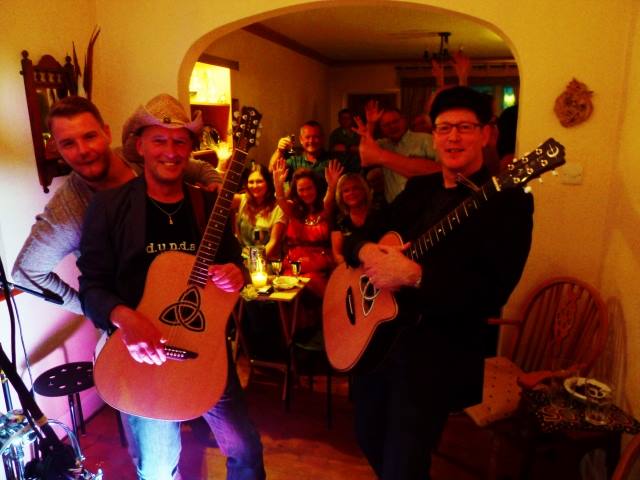 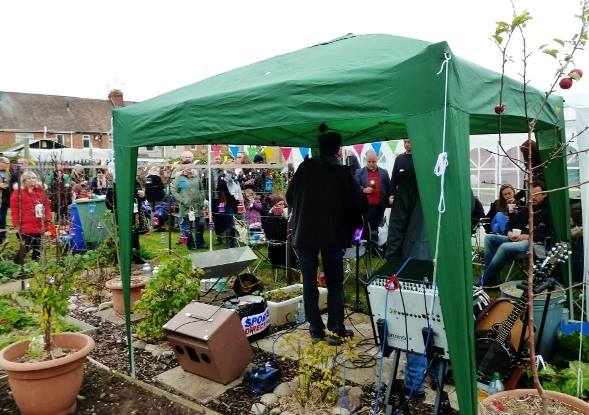 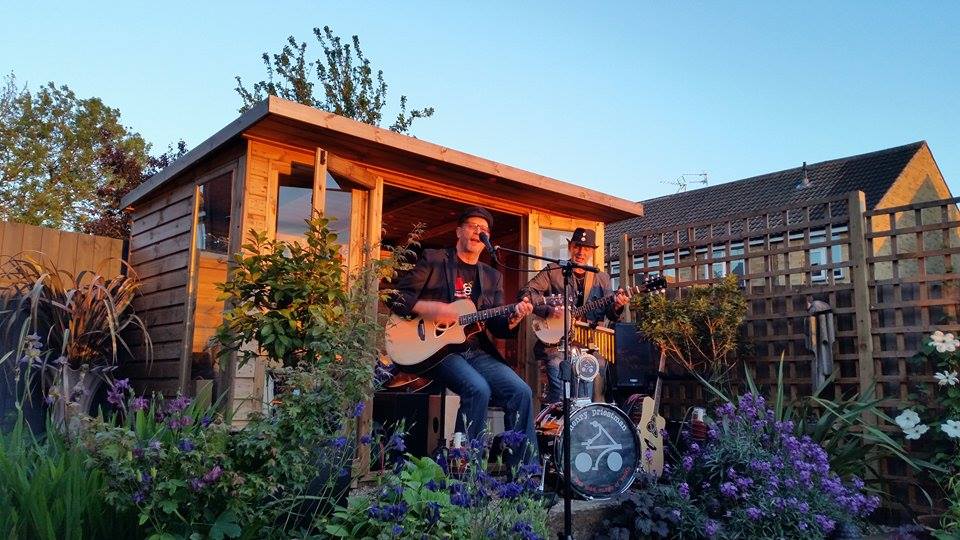 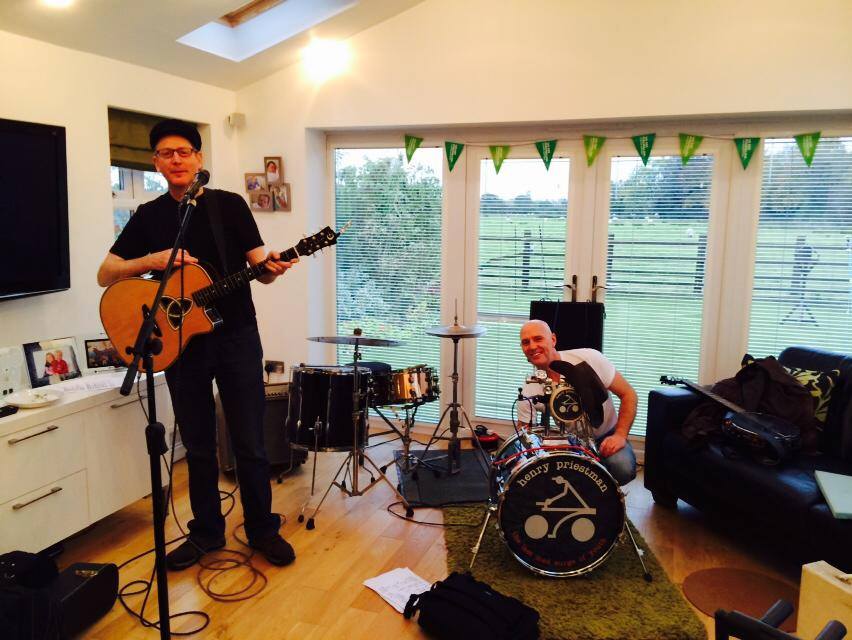 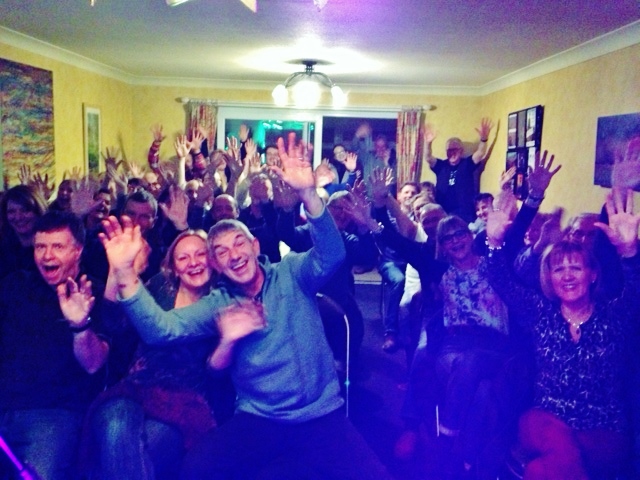 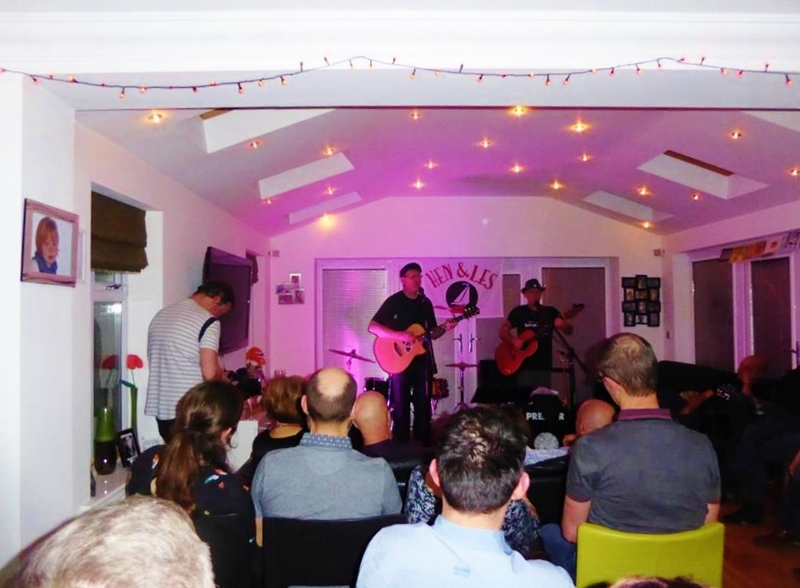