Just taking a bit of a break before the autumn onslaught of gigs, time to get a newsletter sorted.

This last month there’s been a veritable media blitz on me (well, I call two bits of Henry P media coverage, a “blitz”!).

Bay TV in Liverpool filmed an in-depth interview with me earlier in the year, and this was broadcast in late July as the opening one hour long programme in their “Scouse Pop” TV series.
Paul Skillen, the interviewer, really knew his stuff and put me at my ease, and for once I was able to watch the programme without cringing too much (I still haven’t watched the Vintage TV “Needle Time” programme from last year yet, even tho’ someone kindly made me a DVD copy of it…maybe I should give it a go now!). 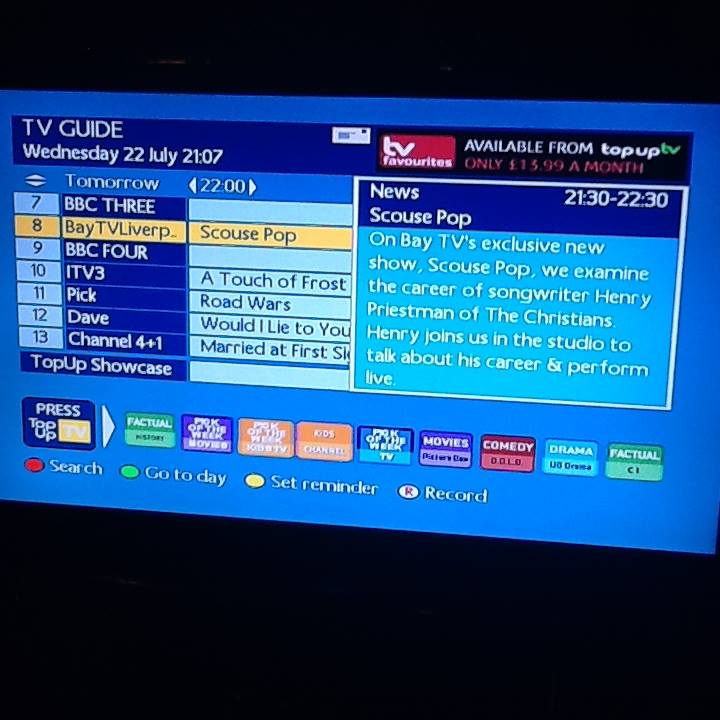 The programme went right back to Yachts era (’77), then onwards, dealing my time with The Christians, finishing off with my two solo albums. In between the chit-chat were songs relating to what we’d talked about; four songs were performed live in the studio by myself and Les Glover, these were Love You Love You (Yachts), Ideal World (The Christians), Don’t You Love Me No More? (HP, “Chronicles of Modern Life”) and Valentine Song (HP, “The Last Mad Surge of Youth”). 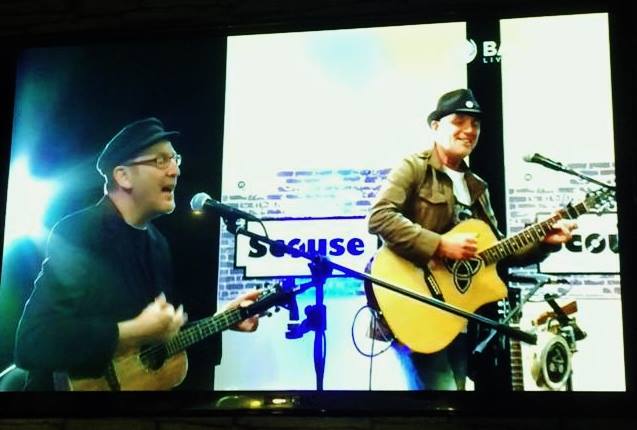 Unfortunately only people in the Liverpool area were able to watch the programme live, but the good news is it’s been sold to a few more local stations around the country (Brighton/Sussex for one), and also now has been uploaded to youtube, and can be watched here:
https://www.youtube.com/watch?v=RUeiIeMBmNk

A week later, (apparently due to the Bay TV prog) the Liverpool Echo (who’ve not exactly championed me in the last 10 years…I’m too old perhaps?) did their own media blitz, featuring me 3 times in the paper in one week, including a full page interview…big thanks to Echo journalist Paddy Shennan for plastering me all over the paper…the main interview was this one: 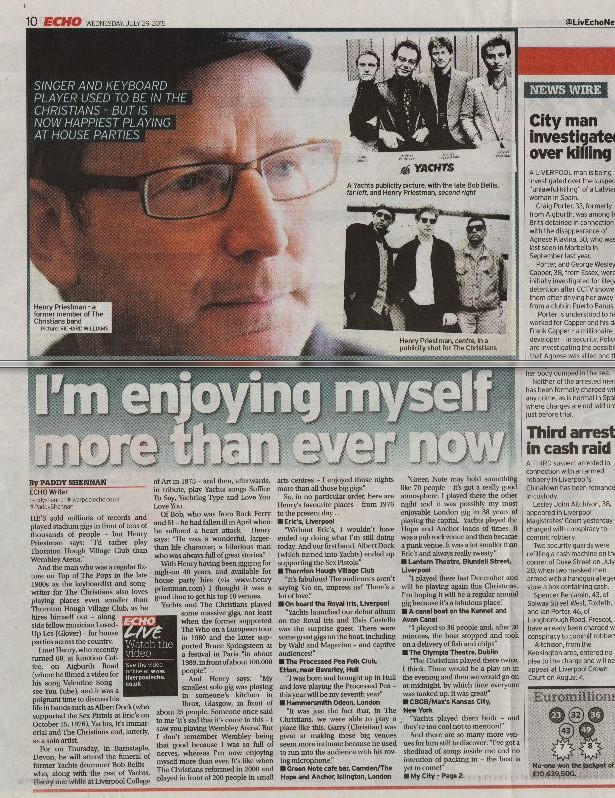 Easier to read on this online link: http://www.liverpoolecho.co.uk/whats-on/music-nightlife-news/wembley-arena-prefer-playing-peoples-9745374

Those of you who have read the above will have seen the mention of the sad death of Yachts’ drummer (and all round character and brilliant fellow) Bob Bellis. He’d had a heart attack a few months back and never fully recovered from it, such a sad loss. Les and I were invited to play at the “send off” after the funeral near his home in Devon – a joyful occasion remembering what a wonderful man Bob was. We’d learned 3 old Yachts songs for the occasion, and even had Bob’s nephew Michael Kalik on drums and harmonies (and my brother Will on cahon)…credit to Steve Conway on bass, who’d hardly heard any of the songs before, but was great nonetheless!…Bob’s sister Jean filmed some of the chaotic goings-on, and here’s Yachts’ single “Love You Love You” which initially came out in 1979: https://www.facebook.com/Michael.Kalik.Singer.Songwriter.UK/videos/10153583288994038/?pnref=story

Also mentioned in the Echo piece is my love of housegigs (“Wembley Arena? I prefer playing in people’s houses”)…played a few more in the last month or so, and as well as in people’s houses, we also played in a Spanish tapas bar in Derby, and an indoor dog training centre in Northumberland (on astroturf, see pic below!), both hired for the occasions, showing that these sort of gigs can happen almost anywhere.

With that in mind, I’m at present in discussions with a film production company (who also shot my Settle Down DVD) who are interested in following Les & I round for the next year for a documentary about the housegig phenomena (and using me as the guinea pig!). They’re looking to do a “crowdfunding” venture to help pay for the filming/editing etc, but more news about that later.

Anyway, loads of gigs coming in which are mostly up on my website (under “Gigs”) and/or Facebook (artist page, under “Events”), and I’ll get details for the latest ones up as soon as poss. These will include an extra night at The Lantern Theatre in Liverpool (first night Dec 12th sold out, so we’ve added Dec 11th now), and a return to my birthplace Hull to play Kardomah94 on Oct 2nd, which’ll be my first proper gig in the city for 28 years!

Enjoy the remainder of the summer (“what summer?” I hear you cry, as I write this with rain pouring down outside!)

This message is only visible to admins.
Problem displaying Facebook posts. Backup cache in use.
Click to show error
Error: Error validating access token: The user has not authorized application 1332798716823516. Type: OAuthException

#FromTheArchive Anyone able to translate Japanese? From The Christians' Japanese 'tour' 1988. I say tour, we only played a couple of gigs (Tokyo and Kyoto), but seemingly (as demonstrated here) countless interviews, and TV and Radio.What an experience! ... See MoreSee Less

What strange force drew me on this very day to check out what poster it was on the top of the cupboard?44 years ago TODAY, the rumbustious 7-piece Albert Dock play their penultimate ever gig at Liverpool's Erics.Just over a month later we'd slim down to a 5-piece and change our name to Yachts.Live pic from earlier Eric's gig, courtesy Monty Rakusen via Martin Watson ... See MoreSee Less